The Benefits(益处)of Doing More than You Are Paid for

One rainy afternoon an old lady walked into a Philadelphia department store.Most of the clerks ignored(忽略)her, only one young man asked if he could help her.She replied that she was just for the rain to stop.He told her he wouldn’t try to her anything she didn’t want.Instead he brought her .

When the rain stopped,the lady the young man and asked for his card.A few months passed,the owner of the store received inviting this young man to Scotland to get orders for providing goods for a large company!The letter was the old lady for whom the clerk had provided a chair.She happened to be owner’s mother of the large company, .

When the young clerk had his bags packed for Scotland,he had already been one of the in that department store,all because he had shown a little to a stranger when no one else would. 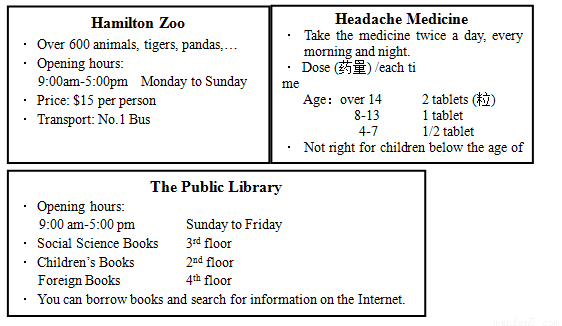 2.If you want to borrow some children books, you can go to the .

3.Lin and his father want to go to the Hamilton Zoo, they should pay .

It heavily when I left the cinema.

One of my good friend , Bob , had a very big dog .Its name was Bill.Every Sunday afternoon,Bob and Bill had a walk in the park , Bill liked walking with Bob very much.

I visited Bob last Sunday.I stayed in his house for a long time.Bob and I talked with each other happily.Soon it was time for them to go for a walk in the park .We forgot that.Bill began to worry about it.He walked around the room and sat down in front of me and looked at me.But I didn’t know this.I went on talking with my friend.At last, Bill couldn’t wait.He went out of the room and came back soon.He carried my hat in his mouth.Oh, I knew what Bill meant.

1.How many people were there in this story?

2.Which one is TRUE about Bill?

A.Bill was a good friend of the writer.

B.Bill liked talking with his friend.

C.Bill had many good friends , he liked playing with them.

D.Bill liked walking in the park every Sunday afternoon.

3.Where was the writer last Sunday？

A.He was at home. B.He was in the park

B.wanted to play with his friends

D.wanted Bob to take him for a walk

A.wanted the writer to leave

B.liked the hat very much

.Alice and Jason were sad, they were late for the meeting the heavy rain.

D.listen to music before you buy

3.Which of the following is RIGHT according to the table?

A.You can have breakfast without paying money.

B.Your father can get hot milk for free.

D.You can listen to Jazz music on Thursday.

Frank was a teenager living with his father. He had so many family rules t 1. he couldn’t stand, so he left home. Because he couldn’t find a job, he had to make a l 2. by begging.

Years later, his father was old, but he was still l 3. for his son. He had been to every corner of the city. E 4. he went, he put up a big photo of himself and Frank on the wall. At the lower part to the photo, he w 5. , “I still love you, my dearest son. Please come back home!”

One day, Frank saw one of the photos. The faces on the photo were familiar to him. "Is that my father?" He thought for a while and decided to go b 6. to see his father.

It was an early morning w 7. he got home. The door was not locked. He rushed to his father’s bedroom. “It’s me! Your son is back home!” The father and the son held each other, full of happy tears（眼泪）in their e 8.. The son asked, “W 9. is the door unlocked? A thief could get in." The father answered in a soft v 10. . “Because I’m expecting your return. In fact, the door has never been locked since you left."